The Reserve Unit of the Park Ridge Police originated through the Civil Defense Program in 1950.  The program was formed to assist each Town, State, and the Country against enemy action (war) and provide aid during times of need (such as natural disasters).  Today the Unit has significantly evolved from where it used to be and remains ready to serve.

Reserve, Auxiliary, and Special Officers are widely used throughout the United States and depend upon dedicated individuals willing to make sacrifices to serve their Communities.  Similar Units currently exist in approximately 24 of the 70 municipalities in Bergen County.  These Units operate under the New Jersey Emergency Management Law (Title 58, Appendix A:9-33.1) and fall under the Office of Emergency Management (OEM).  This means that they may be utilized anywhere they are needed by Local, State, and Federal Agencies.

Reserve Officers of the Park Ridge Police attend the Bergen County Police and Fire Academy located in Mahwah, New Jersey and must meet all criteria mandated by the State of New Jersey.  Once initial training has been completed, Officers are required to complete a minimum of 96 training hours per year.

Reserve Officers are permitted to enforce all laws in the State of New Jersey and are afforded full Police Powers while on duty.  It is up to the Chief of Police to utilize the Unit in an appropriate capacity when it is not called upon by a higher authority.  Duties of the Reserve Unit in Park Ridge during non-emergency times include traffic control, crowd control, medical aid, emergency response, and patrol functions. 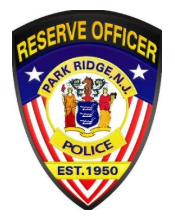 Applications to become a Reserve Officer in Park Ridge are accepted from September thru January.  Applicants should understand they are volunteering to contribute to the overall mission of the Unit.   Individuals are expected to be professional on and off duty and will be held accountable for their actions at all times.  Before applying, make sure you and your family are ready for what will be required of you.  In order to qualify you must:

The Reserve Unit of the Park Ridge Police Department is committed to upholding the Constitution, Community, and Agency it serves.  The Unit relies upon the professionalism, dedication, and commitment of its Officers to accomplish this task.

Our vision is to work as a vital part of the Police Department in building and maintaining the strong bonds of a healthy community policing program.  This will be accomplished by providing all Officers with the tools they need.  In turn, the Unit will effectively assist the Police Department in meeting the challenges of reducing crime, creating a safer community, and improving the quality of life.

The core values of this Unit are: